The other day, Chillbrook posted some wonderful summer solstice images taken at this part of the Cornish coast on his blog Cornwall Photographic here,

I commented on his blog post, and mentioned that I had a few images from my only visit, over quarter of a century ago (gosh, that makes me sound ancient – I’m not really!) he said he would be interested in seeing them – so here they are. Original images taken on a Canon FTb with either a 35mm or 50mm prime lens, Fujichrome film stock. More than that I can’t say, lost in the mists of time…

I know it was a beautiful late afternoon in October. Look at the clarity of that water:

The late afternoon sun was throwing shadows across the bay:

This shot gives the best view of the rocks as stepping stones for a giant: 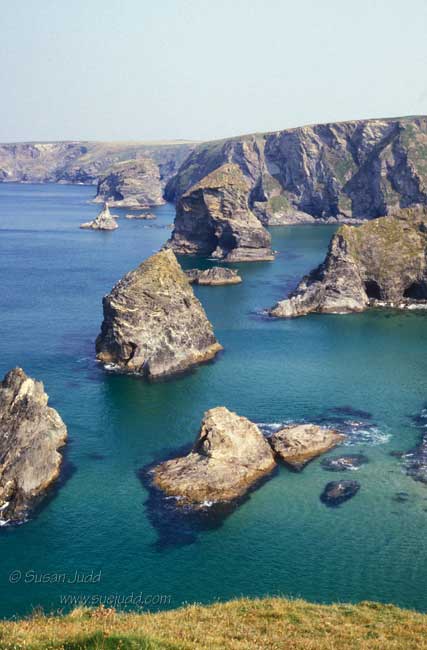 I think I was standing on steps descending to the beach here (I was quite disappointed that it was high tide, and I couldn’t actually get onto the beach:

I really should go back one day, and ensure I get some shots of the golden hour at either end of the day….